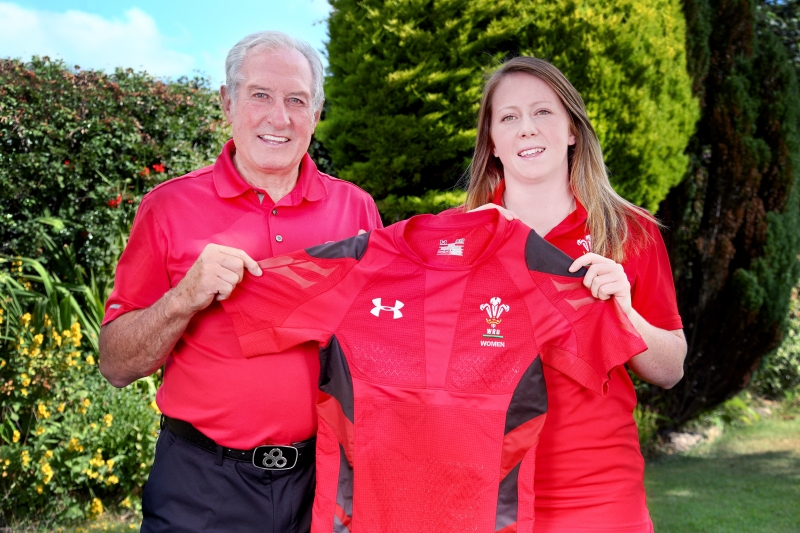 Next week, the West Wales farmer’s daughter breaks away from her studies to line up again the biggest and best rugby players on the planet in the IRB Women’s World Cup.

For this test, she has a secret weapon: special advice from the greatest player to ever play the game (and the Botanic Garden’s honorary president) Gareth Edwards CBE.

Carmarthen-born Jenny, 24, said the former Cardiff, Wales and Lions scrum-half may have played all his rugby before she was born but he is an inspiration for every generation of rugby players, male and female: “He’s a legend and an icon and had words of encouragement and advice for me when we met, and I will be taking this and all the best wishes of the team at the Botanic Garden with me to France.”

The former Whitland schoolgirl will be jetting off with her Welsh team-mates on Monday (July 28th). Their first game is against the hosts France, in Paris on the Friday (August 1st) followed by pool matches with Australia and South Africa.

After waging war on deadly bacteria, this is going to be a picnic, right? “We’ve avoided the two top-rated woman’s teams in the world: England and New Zealand. But the hosts will be very strong and the others are no pushovers. But the way we’ve been playing and the way we look in training, there’s no reason we can’t qualify for the quarter finals.”

Gareth said: “I wish Jenny and all her team-mates the very best of luck for the World Cup.

“With the vital work that goes on there, the Botanic Garden has a crucial role to play for Wales on a world stage so it will be fantastic to be cheering on one of their brightest stars in the biggest competition of all.”

Safe in her lab, the 5ft 7ins second row is wholly focused on microscopic bacteria rather than giants of the women’s game. Her three-year, KESS-funded project involves testing the effects of raw honey against two of the most common hospital-acquired infections, the antibiotic-resistant bacteria, MRSA and Clostridium difficile.

Says Jenny: “It’s a joint project between the Botanic Garden and Cardiff University and I’m extracting chemical compounds from plant-derived material in the honey and testing them against the superbugs. I’m also carrying out next-generation DNA sequencing techniques at the Botanic Garden to see – from the amplified DNA samples – which plants have contributed to the making of the honey.”

Jenny was bitten by the science bug at Dyffryn Taf school in Whitland. Her love of rugby was nurtured by Whitland RFC – although she admits the sport is in her blood . . . maybe even in her DNA: “My mum, Sally, played rugby for Aberystwyth Uni and my brother Andrew, 22, and my dad Paul both used to play for Whitland.”

Her older sister Kim, is a doctor in Cardiff which is where Jenny went to study microbiology after leaving school, and where she turns out for club side Llandaff North.

Mum and dad still live on the farm – in Cwmfelin Boeth, near Whitland – where Jenny grew up: “It was the best possible start in life growing up where there is such a rich tradition of Welsh internationals. I will be doing my best to make everyone proud.”

Jenny and Gareth are pictured with Jenny’s Wales jersey from the Italy clash in this year’s Six Nations when she earned her first cap.